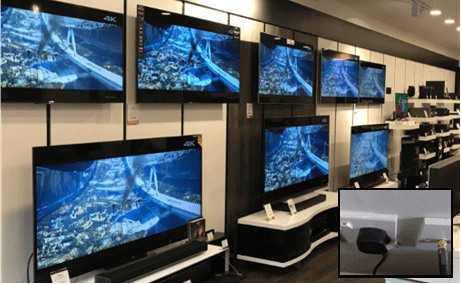 Researchers on behalf of Ofcom have been investigating which is the most energy efficient way of watching television, covering the journey from the broadcaster to the viewer. They’ve found most of the energy consumption in that journey takes place at home.

Viewers could save energy and reduce carbon emissions by watching a live TV programme on Freeview instead of streaming.

Research undertaken by consultancy firm Carnstone on behalf of broadcast regulator Ofcom found one hour of viewing TV via terrestrial networks has an energy consumption of 9.1Wh. For streaming, this is 54Wh. Carnstone found that a significant portion ofthe energy consumption from TV viewing (97% for digital terrestrial TV [Freeview] and 90% for OTT – Over-the-top streaming) is accounted for by in-home devices, when compared to each method’s respective distribution networks.

Some devices used within the home, such as Wi-Fi networks and set-top boxes, are usually always-on and consuming power (albeit apparently low). This adds up to a significant proportion of this figure for streaming services.

In 2020, BBC Research and Development teams came to a similar conclusion. Unlike the Ofcom commissioned research, the BBC also looked at cable and satellite TV. They also found that streaming live content consumes more energy. Their research also confirms most of the electricity used in the journey from broadcaster to viewer was at home. Satellite and cable TV was not far behind streaming, partly thanks to viewers needing an extra device (i.e. cable or satellite receiver) to view content. According to the BBC research, viewing Freeview was the most energy efficient way of watching live TV.

Ofcom says it wants to consider the energy consumption of in-home communication and media devices and the potential for consumer advice on how to use these more efficiently.

It says it wants to work with industry to explore how in-home networking systems might be made more energy efficient. And it also wants to do more research on the relative energy consumption of content delivery network (CDN) multicast and IP multicast for broadcast channels delivered via IP networks.

But for most TV viewers facing rising bills, most just want to know if there’s a way they can save more energy.