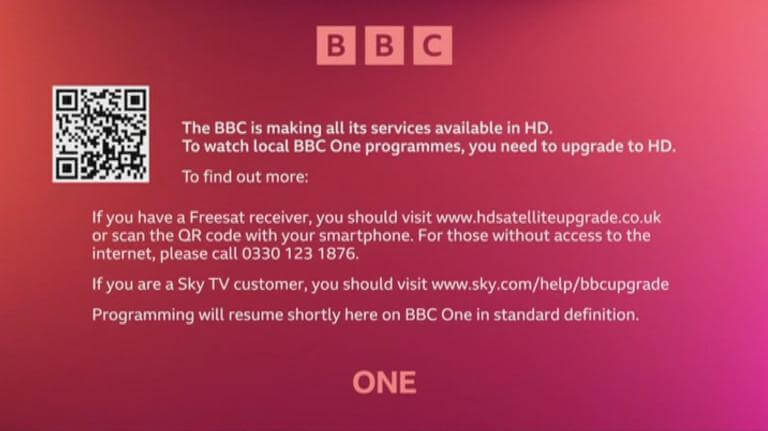 Viewers who see this version of the red slate pop up on BBC One will need to upgrade their equipment in the next 12 months.

The new slate is part of a campaign to make viewers aware of the closure of standard definition services on satellite, which will take place in early 2024. It will begin to appear on devices that can’t be upgraded to the BBC’s new high definition (HD) service.

Unlike the current red slate that will disappear from BBC One HD in England as regional news programmes go HD in the coming weeks, the new slate, containing a QR code, will only be seen by a minority of viewers.

Only viewers with older SD-only satellite receivers will see this message. Many of the affected receivers are well over 10 years old.

All newer satellite receivers, including Sky Q, Sky+HD and the Freesat 4K Box support HD and will be automatically upgraded. The BBC says the majority of satellite receivers in use today in the UK are compatible with the changes it is making.

Anyone watching on an HD compatible receiver in England will begin to see their local BBC One HD on channel 101 in the coming weeks.

By the end of March, all regions will be upgraded on Sky and Freesat. Additionally, BBC Alba, BBC Parliament and BBC RB1 will also become available in HD on satellite.

To prepare for the HD switch, regional news centres have been upgraded to be able to broadcast in high definition. Some regions have also received new studio sets.

The process has taken over 10 years to complete after multiple delays, linked to funding.

You’re not affected if you have:

You are affected if you have…

How can I tell if I need to take action?

What do I need to do?

What if I don’t do anything?

I have a non-Sky or Freesat receiver, do I need to retune?

If you have an older SD satellite receiver, you’ll need to upgrade. Otherwise, from 2024, you’ll lose BBC services via satellite.

There are no changes to coverage, which limits reception on sub-1 metre dishes to the UK, Ireland, Netherlands, Belgium, Luxembourg, northern and central France and western most parts of Germany.

Reception of HD channels beyond this area may be more difficult than SD. This is due to the different broadcast parameters used for HD services.

Share:
featured news
Previous ArticleSurprise Freeview channel change in Wales
Next Article Channel 5: More of us are tuning in