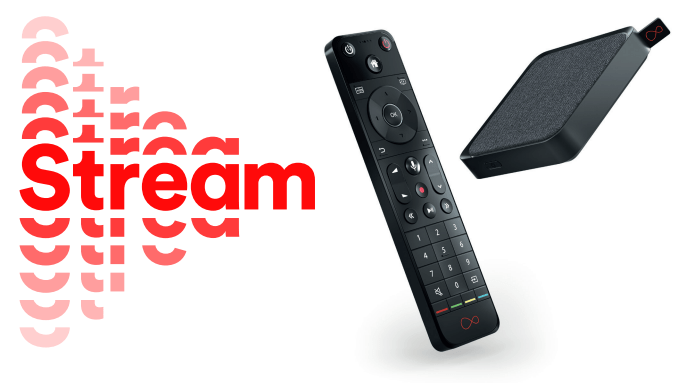 Virgin Media’s new Stream box allows users to access its TV service, plus streaming apps without the need for a cable TV connection or a contract.

The new Stream box will connect wirelessly to the internet. Weighing in at just 97 grams, the box is powered by user’s TVs and supports both HD and 4K UHD services. It’s a rebadged version of Liberty Global’s mini IPTV box, reconfigured for Virgin Media Stream. It consists of 85% recycled material.

Unlike traditional TV services, including Virgin Media’s own TV service, Stream is not linked to lengthy contracts with in-built price rises. Instead Virgin Media O2 says customers will be able to add and remove subscriptions on a rolling monthly basis.

Powered by Liberty Global’s Horizon 4 TV Platform, the Stream box will come with a voice controlled remote. HD versions of Virgin Media’s TV channels will be provided as standard.

It will go on sale to customers on Wednesday 27th April.

How does this vary from Virgin Media’s existing TV service?

To access Virgin Media TV, you needed to be connected to its cable TV network. DVB-C TV signals were delivered down cables in your neighbourhood to a socket in your home. Your cable receiver was then plugged into that socket.

Virgin Media Stream will be delivered through a broadband internet connection. The Stream box will connect via wi-fi to the Virgin Media broadband router. There is no requirement to have cable TV installed.

If your TV has an HDMI slot, Stream will support your TV.

But: At the moment, Stream customers will need to have Virgin Media as their broadband provider. If this link is broken, it paves the way for millions of users to access Virgin Media’s TV service as a standalone entity.

After a one-off set-up charge of £35, customers will be able to pick and choose which services they want.

Individual services can be added or removed each month on a rolling 30 day term.

All subscriptions can be combined on a single Virgin Media bill. There’s an incentive to do so (instead of continuing separate billing if you’ve already got e.g. Netflix): Stream also includes a “Stream credit” offering customers a 10% discount when they add them via their Virgin Media bill,

Virgin Media Stream users are able to add and remove services including:

Who can get the Stream service?

At launch, Stream is available to both new and existing customers who take a Virgin Media broadband-only or broadband and home phone package.

Is this similar to Sky’s puck?

Yes. Both Sky’s stream Puck and Virgin Media Stream both enable subscribers to access TV and streaming services without the usual extra equipment – no dish for Sky, no cable TV connection for Virgin Media.

Sky’s Puck is currently available with a Sky Glass TV. But later this year, Sky is planning to release the Puck as a standalone service.

What are the downsides of such services?

Also due to licensing issues, recording programmes is restricted. That’s because IPTV boxes don’t have an in-built hard drive. Instead, the recordings are stored in the cloud. But broadcasters and rights holders are currently restricting the availability of cloud recordings. Again, during beta-testing, Stream trialists found the record button was disabled on the remote control.

“At a time of endless entertainment choice and a strain on household budgets, we’re putting viewers first. Stream customers will only pay for the entertainment they choose and can pocket monthly savings on the content they add – it is a truly flexible and personal way to enjoy the entertainment that matters most, at great value. Stream is more than just a new TV service, it’s whole new way to enjoy connected entertainment. More than ever, content and connectivity go hand in hand and with Stream we’re delivering the best of both.It