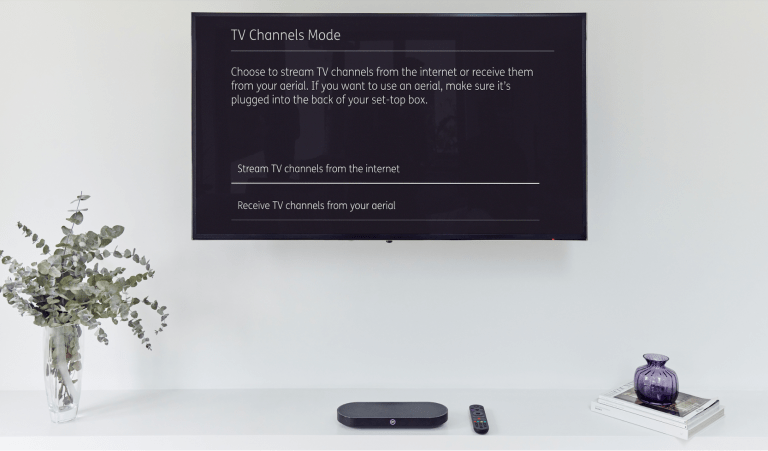 For the second time in just over two years, BT TV customers are being asked to choose between losing channels or missing out on new services.

BT’s newly launched aerial-free TV service on its Pro and Mini boxes is BT’s biggest step so far in breaking away from Freeview. Until now, reception of all the main free-to-air channels has been dependant on plugging an aerial lead into the box of a BT TV box, to receive services from Freeview.

Pro and Mini box users can now switch to internet mode to ditch the aerial and receive all the main channels through their broadband connection.

But viewers who have switched to internet mode have lost channels including Dave, Drama, W, GREAT! movies, Blaze and Smithsonian Channel.

Talking Pictures, GB News and TalkTV are also absent from the list.

But internet mode does provide access to a greater number of channels in HD, including regionalised versions of the main channels.

In 2020, BT TV customers were presented with a similar dilemma. On that occasion, it affect the telco’s pay TV channel line-up. Viewers who were first to make the switch to one of BT’s new flexible TV packages with NOW (TV) found they had to sacrifice access to a number of pay TV services. At the time it meant choosing between gaining Sky Atlantic or losing services such as Eurosport, Movies 24 and TLC. BT subsequently began to either withdraw channels on its legacy packages or make services like Eurosport available on new packages.

BT anticipates more of the missing free channels will become available via internet mode in the future.

Aerial or Internet Mode: Which is better?

Both options still provide access to BT’s premium TV service with channels from NOW and BT Sport/Eurosport (channels in the 300-599 range). These are delivered through the internet, regardless of which mode is chosen for the free channels. And users will still be able to access all the various apps that come with BT TV.

Side by Side: Channels available in Aerial Mode and Internet Mode

Freeview is working on delivering a similar solution for its next generation of Freeview Play receivers. Called IP-fallback, viewers will switch over to online streams of the channels where coverage is poor. But it could also become a key tool in migrating viewers fully from terrestrial to IP-based services.